The Atlanta Business Chronicle (ABC) recently released its 2014 Book of Lists, which aims to provide business professionals with an overall picture of the area’s top companies and how their own businesses rank within their respective industry.

For the sixth year in a row, Guardian Pharmacy was included in the Top 100 Private Companies list for Atlanta. To qualify for the listing, companies are ranked by revenue, must be headquartered in the metro Atlanta area and not be a subsidiary of another company. This year was our highest ranking yet – we came in at number 46, up four spots from last year.

We look forward to another great year of service and growth and would like to thank our customers for their continued support. 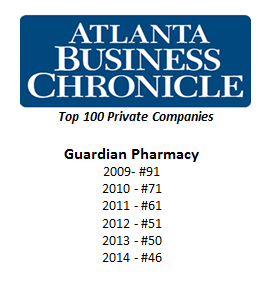